In the summer of 2014 my husband and I found a farm house on nine acres in the countryside around Wichita, Kansas.  We fell in love with it and purchased it in November beginning our journey rehabbing what we have affectionately named “The Noah Farm“.

Why this name?  Because one morning while thinking about Noah and the long process of building the ark,  I looked up his name  and found out it means “rest”.   It seemed appropriate since this would hopefully be the place my husband and I would retire to and because it felt like it would take forever to get it accomplished.  We would definitely need rest!

The house needed a complete overhaul and my two sons suggested we burn it down and start over, but we loved the character and style of this old girl and decided we would give her a face lift.

Our first major task was to redo the limestone foundation which was in desperate need of repair. After many months and many estimates we were able to find a great company who was willing to move our entire house off its foundation so we could have a basement dug and then the house moved back onto a new foundation.  Here is a picture of my son standing in the area where the house had previously been. 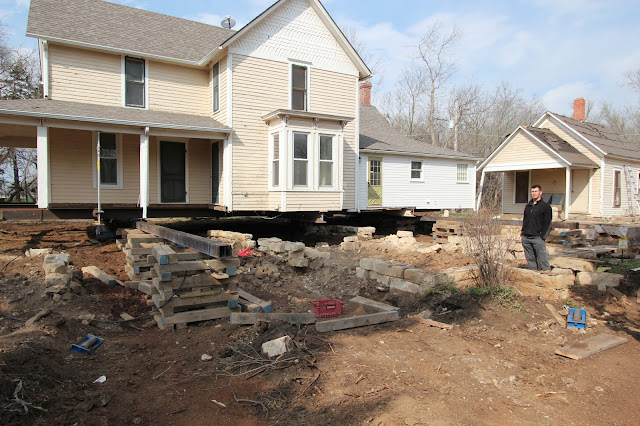 Directly behind where he is standing you can see a small building that was originally the summer kitchen. When the house was originally built, it did not have a kitchen or bathroom.  The cooking was done in the summer kitchen to keep the heat out of the house. (Think of 90 plus degree weather and no A/C). Although we would have loved to save this little building for historical reasons, it was in such bad shape we had to tear it down. 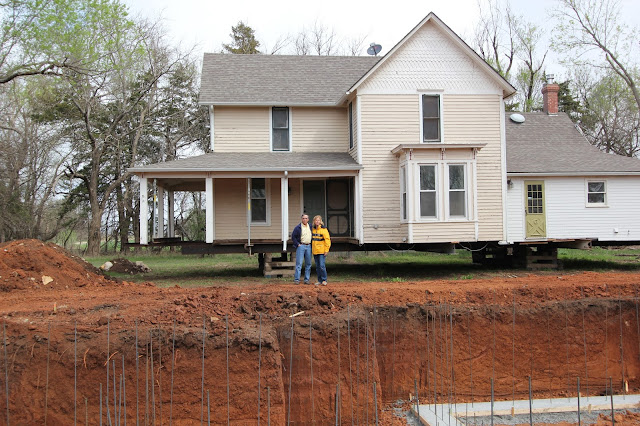 Here is a picture of my husband and I in front of our farmhouse up on what we call giant jenga blocks.  The whole process of the move and the basement being dug was exciting.  The house was moved so slowly on huge “I” beams that you could barely see it moving.  We had a few cracked walls and a few doors that we had trouble opening, but no broken windows or major damage.  It was amazing!

After I cleaned out some flower beds this spring t