Moving the farmhouse to dig a new foundation.

After almost four months of officially owning The Noah Farm, the big house move day is here.  It started on my husband’s birthday, March 23, 2015 and lasted the entire week.  Unfortunately, he had to work almost the entire time and missed most of the excitement. 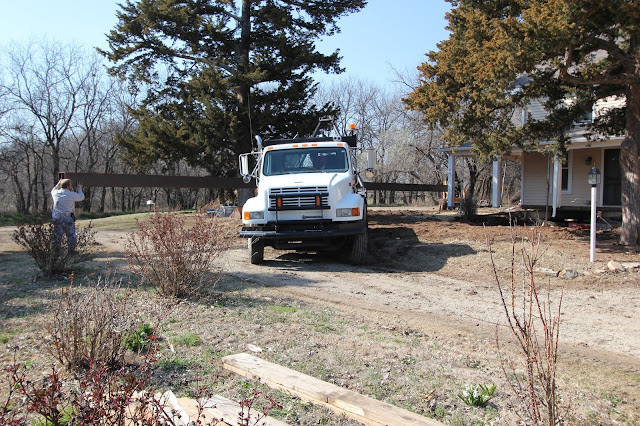 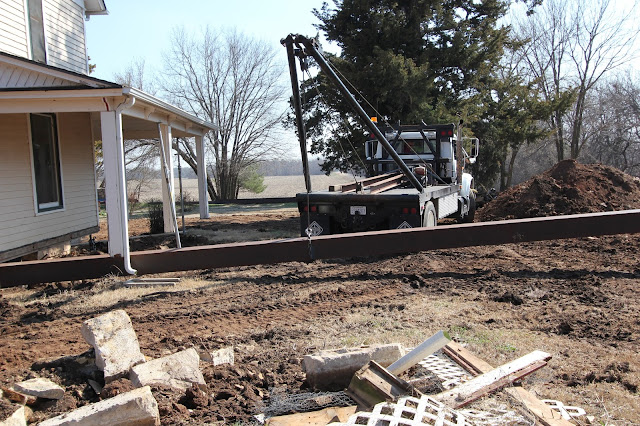 Here is a picture of one of the two longest “I” beams being put under the house running from west to east or along the greatest length of the house. 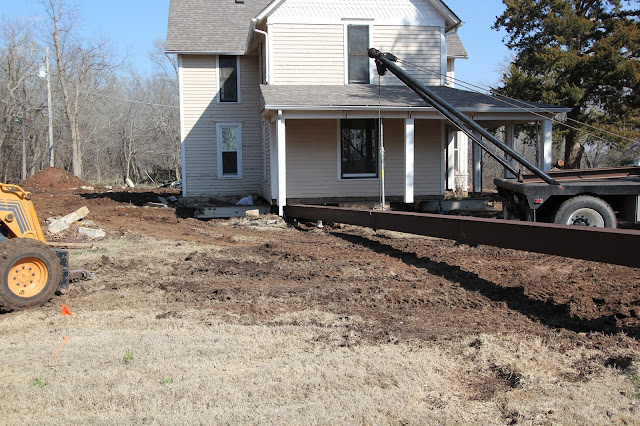 Same beam from a different angle.  The front wrap around porch was taken off and the roof braced up during the move. 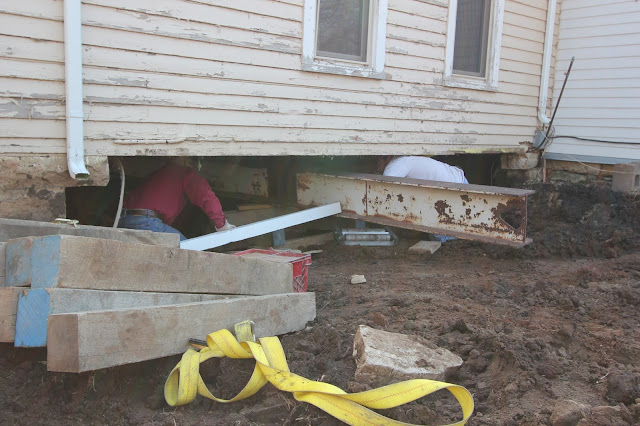 If you look closely at this picture you will notice a square cut out in the “I” beam.  This beam is running north-south under the house or the shortest width of the house and the longer “I beam will cross through this cut out section.  You can also see part of the limestone foundation blocks that are left in place until all the metal beams have been placed under the house. 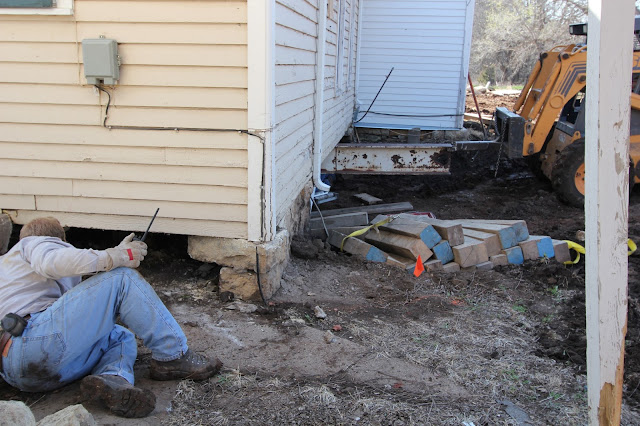 The skid steer was used to first push/guide the beams under the house and later to pull the house as it slid slowly on the beams.  There were four guys total who worked on our move and if you notice, the guy in this picture has a walkie-talkie in his hand which they all used to communicate with each other. 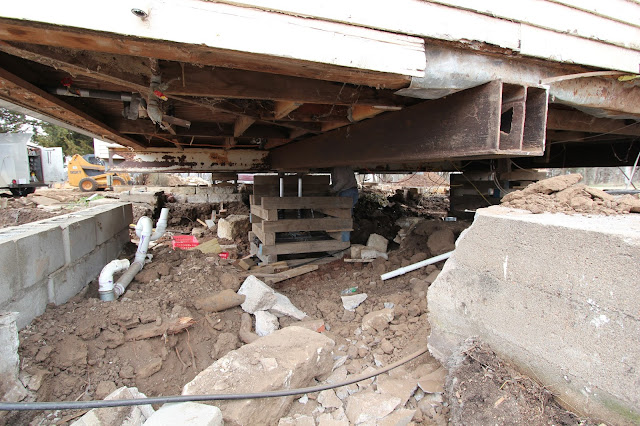 A view from down under. (Funny side note:   When Unruh House Moving company originally came to look at the project, two guys crawled in the very tight crawl space and were greeted by a skunk.  They quickly backed out and fortunately weren’t sprayed.)

The house is now totally off the original foundation and resting on the beams that have been placed in a grid-like fashion under the entire house.  Underneath the beams are jacks and  wooden blocks supporting the structure in four areas. The movers called them giant jenga blocks. 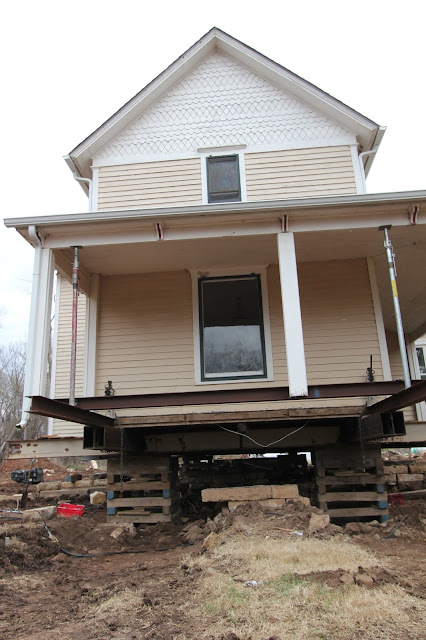 Front view of house on beams and jenga blocks. 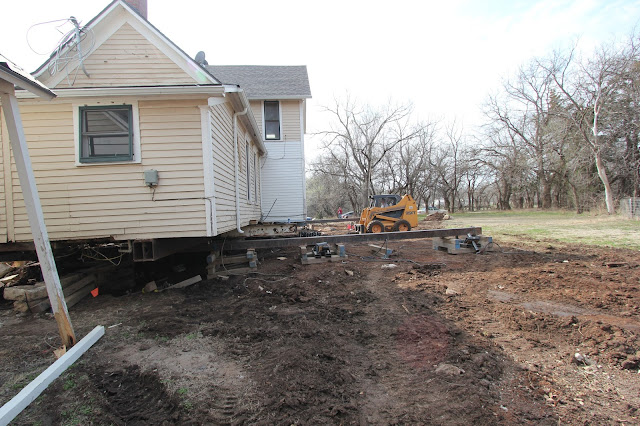 Now that the house is finally set up, the skid steer goes to work pulling the house onto the new set of beams behind the house.  The actual moving of the house is so slow you can hardly tell that it is moving. The house movers use silicone wafers on the beams to help the house slide smoothly. (They used to use Ivory soap).  This house was moved back two full house widths to make room for the concrete company to dig a new basement. 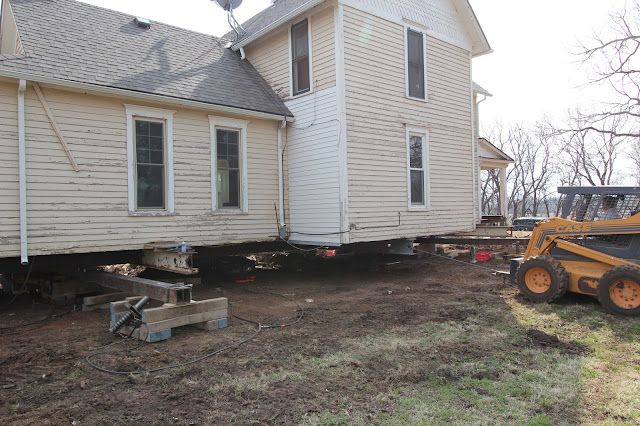 If you look closely,  you can see the cable line attached to the beam under the center of the house to the skid steer. 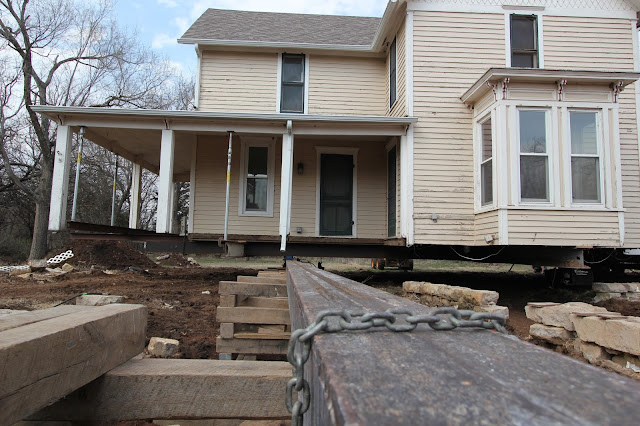 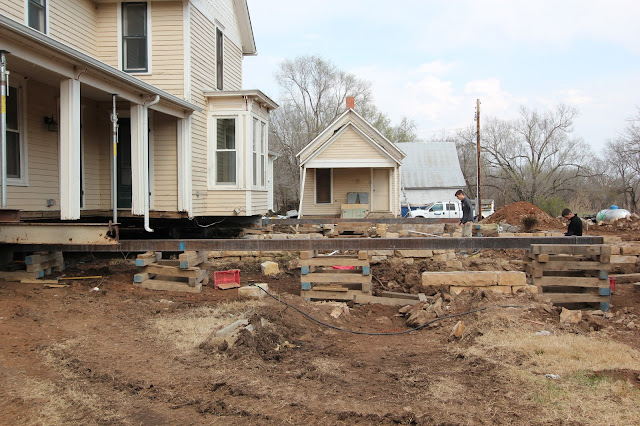 And now two views from the opposite side of the house.  You can see parts of the leftover limestone foundation and the first set of jenga blocks and beams the house had been resting on.  The summer kitchen which was directly behind the house is also now visible. 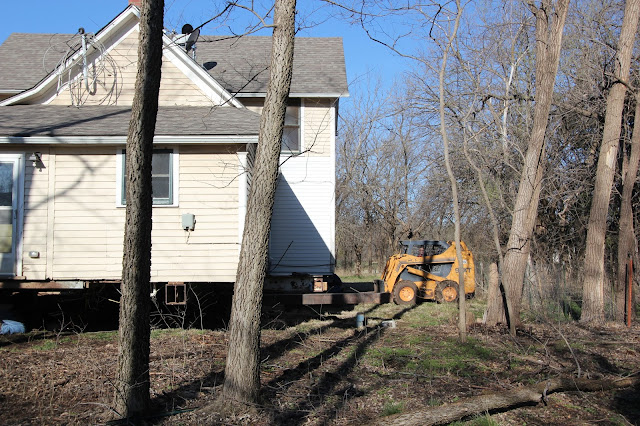 The second move back to the tree line. 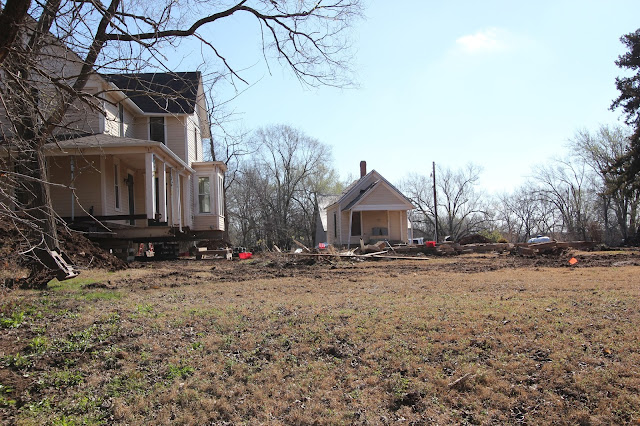 And  finally the house has been moved back two house widths to her resting place for a few months so that a new foundation can be dug.  An exciting week and a fascinating process to watch.
We were very pleased with how smoothly everything went.  And just encase you’re wondering, . . . there were no broken windows or floors.  Just a few cracks in the main living room wall (which we were going to replace anyway) and the doors were a little hard to open.  Oh, happy day!