My husband and I knew that before we could really start  any interior work  on the farm house, the foundation had to be addressed.  With winter upon us and cold air coming in from all the cracks in the limestone foundation, this was a priority. 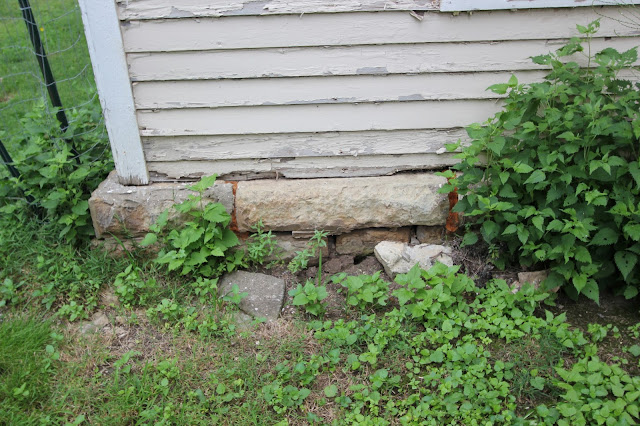 We started making calls to companies trying to find one that would either lift or move the house so we could either repair the current limestone foundation, put in a new concrete crawl space, or basement.  We called and met with one company after another, some who wouldn’t even tackle the job and others whose bids where beyond our budget.

As we kept trying to make some forward progress on the foundation, my husband bought his best ever Christmas present(for himself)….. a new tractor.  So one cold winter day we went out to the farm to get our tractor driving lessons from dad only to find out the barn doors were coming off the tracts.  Here’s my three guys trying to tackle getting the doors off to be fixed. 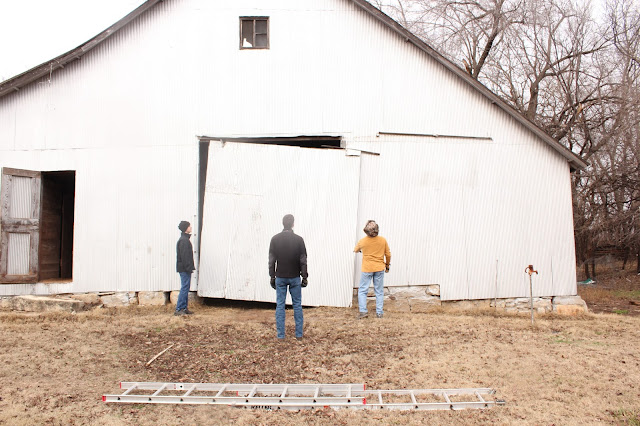 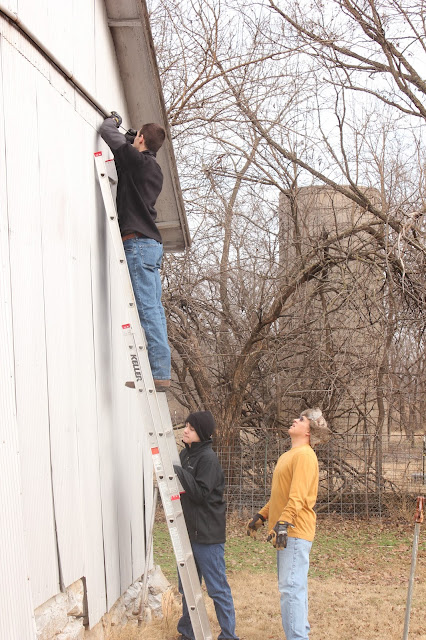 Once the doors were off, we could free the bright orange beast and the lessons began….. 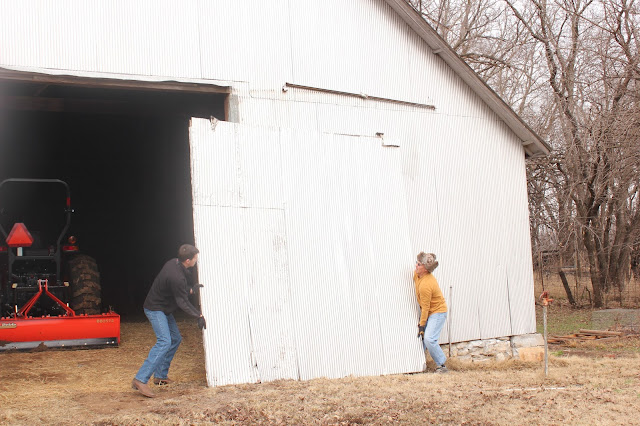 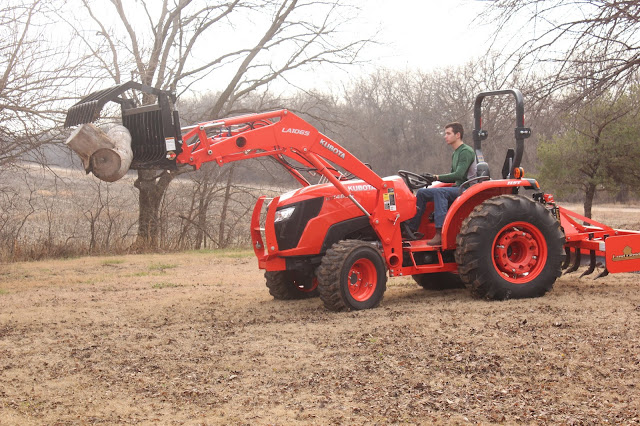 Picking up logs with the grapple 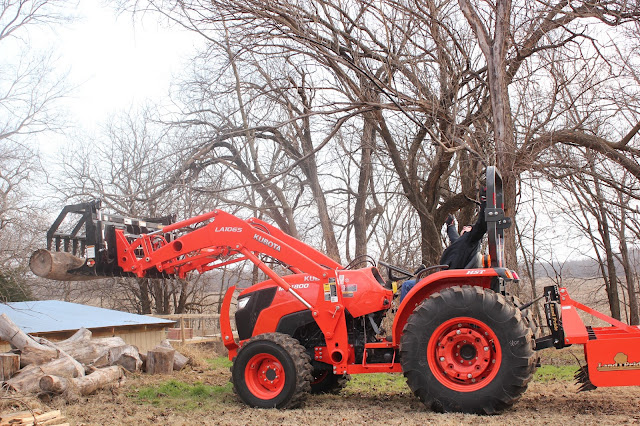 Our youngest son with his arms up in the air after victoriously picking up a log with the grapple.  His first time driving anything bigger than a four wheeler.  And then there is me…. 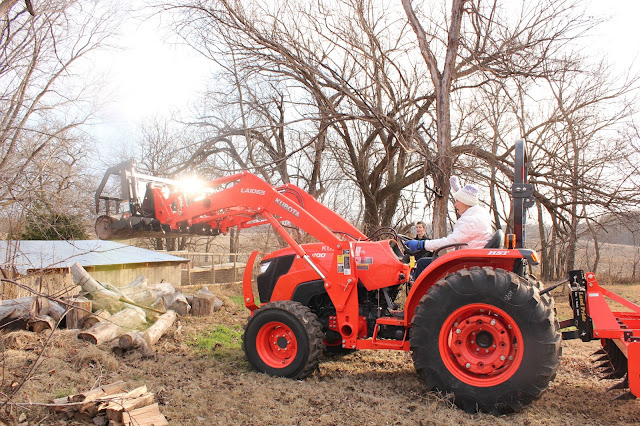 … driving like a little old lady.  I haven’t driven the tractor since, not that I’m afraid of all that power. My husband and sons get so much enjoyment out of it that there is never a need for me to use it.
The last time I was on a tractor was when we lived in Washington state and I was working by myself on our five acre property and we had an earthquake (no joke!). The tractor was jumping up and down and I thought I was doing something wrong and then found out later it was because of an earthquake.  You’d think living in Kansas we wouldn’t have to worry about earthquakes anymore, but we’ve actually had quite a few of them just south of us in Oklahoma.  And yes, we could feel them!
So our first project became replacing the barn doors, which hubby built himself in our garage wearing his Russian fur-lined hat, a Christmas gift. (Just encase you’re wondering what’s up with his funky hair.) 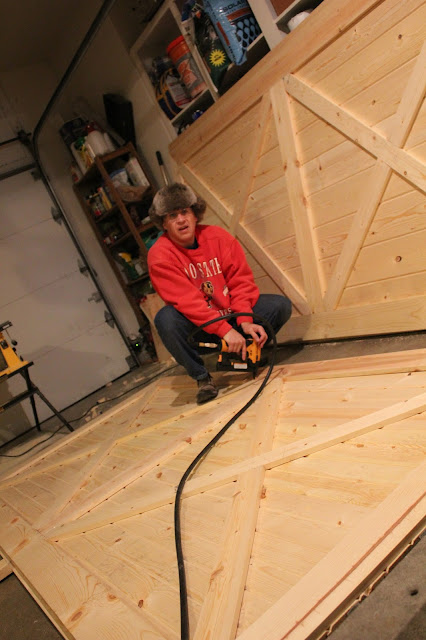 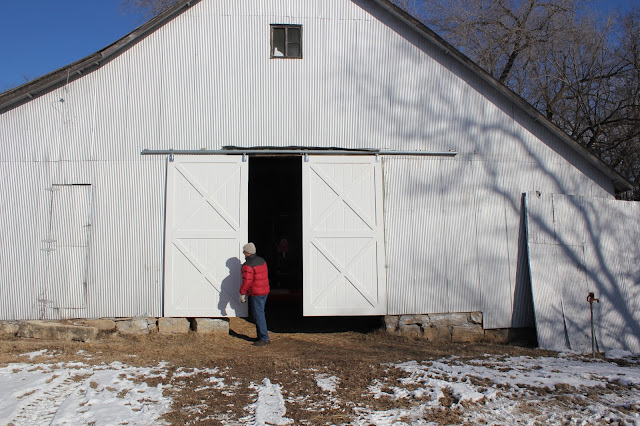 Here’s the brand new white wooden doors on the old metal barn.
So our first project wasn’t even on the farm house, but on the barn, which will probably have to wait a whole lot longer for some more TLC.  At least it gave my husband something to work on while we kept making calls and praying for the right contractor to work on our foundation.

Inside our New Old Barn